Case Study: How We Generated 497 New Leads in 4 Months 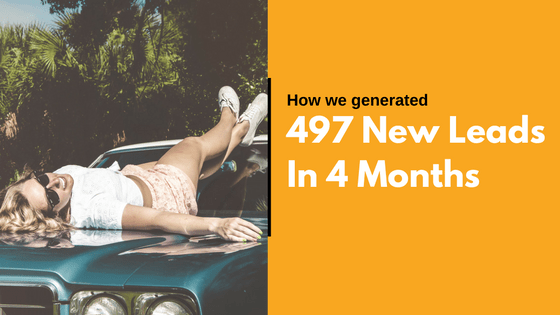 Generating leads is one of the toughest things to do on the internet.

Just from their homepage.

Though we offer our services to multiple industries and niches, our sweet spot is helping auto recyclers increase used car parts inventory in their yards.

So we hired our friend, Sally Miller, to interview the CEO and write up this case study for us.

Take it away, Sally!

Chris Mantas, CEO of Tear-A-Part, has been in the auto recycling industry for 33 years. He and his father previously ran a full service auto business and in 2001, they created Tear A Part, a self-service auto recycler.

“From that point forward our business exploded,” said Chris.

Generating leads in the online world

Cars are the lifeblood of the auto recycling industry. The challenge is reaching enough people who want to dispose of their vehicles.

Chris knew that his target customers could be found online. However, mastering the internet is a full-time job. It requires specialist knowledge.

Chris hired a local media company to help him out. The media company created Google ads aimed at people looking to sell their used cars. When someone clicked on one of the ads, they were taken to the homepage on the Tear A Part website (a no-no if you’ve read this article).

Chris was spending between $3,000 and $6,000 a month on these pay per click ads. However, he wasn’t seeing the results he hoped for.

“It didn’t matter that we were paying more money for the car. We weren’t getting the call,” Chris said.

To make matters worse, the media company was not communicating with Chris.

“I was paying so much money for clicks but had no clear idea of how much business this was bringing in. Also nobody would tell me when my budget ran out. I would stop getting new leads. When I called up they would tell me I had used up my budget.”

Getting more cars for less money

Chris was frustrated. He needed more cars and was willing to spend money to get them. Yet his online campaigns weren’t working.

Then a friend introduced him to Carlos Aguilar, Head of Growth and Optimization at Conversion Surge. Carlos offered to review Tear A Part’s website and ad campaigns.

“Carlos showed how I was wasting my money on my current ads. He offered to work with me for a fraction of my existing budget. I had nothing to lose,” Chris said.

In short, Carlos was promising more cars for less money. 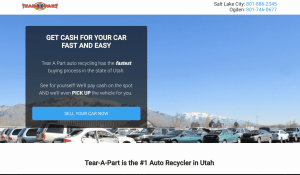 When Carlos reviewed the Tear A Part website, he was surprised by what he discovered. Not only were they sending paid traffic to the homepage, some of the Google Ads pointed to broken web pages.

Others went to an operational page that had no call to action.

People weren’t contacting Tear A Part because they had no clear way to do so.

Making changes to the homepage

Carlos set to work. His goal was to ensure that website visitors contacted Tear A Part about selling their cars.

This started paying off immediately: the ads and landing pages were in alignment, thus increasing the relevancy score in Google AdWords and lowering the cost per click to Tear A Part.

In this case, the existing homepage was performing so badly that Carlos didn’t bother A/B testing and instead created two brand-new versions of it.

Below is a photo of the homepage before the changes: 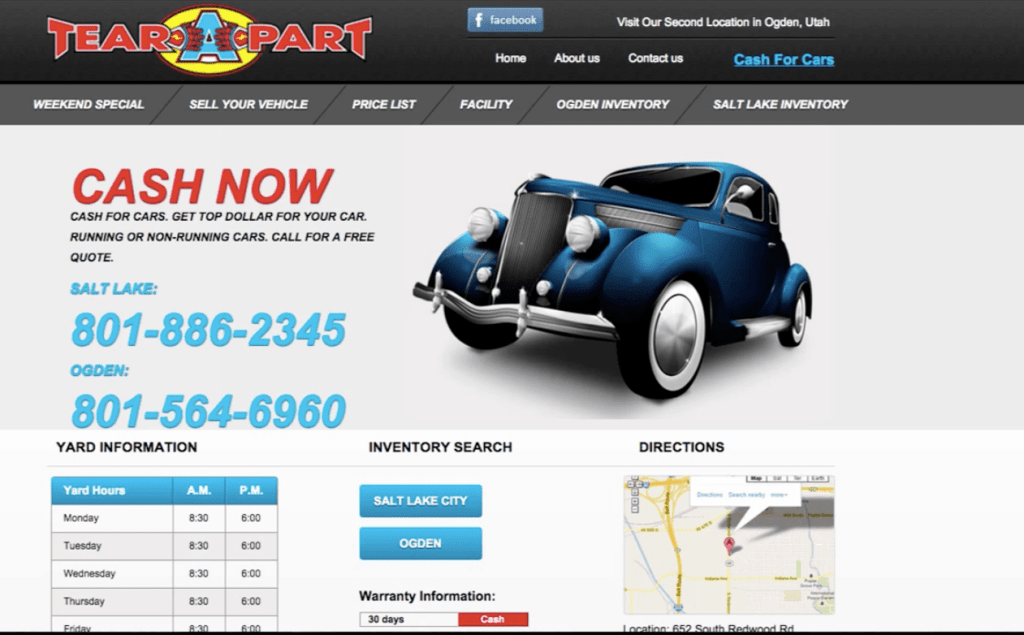 What did Carlos do to this page?

He added the following elements:

Here’s what the new homepage looked like after being implemented: 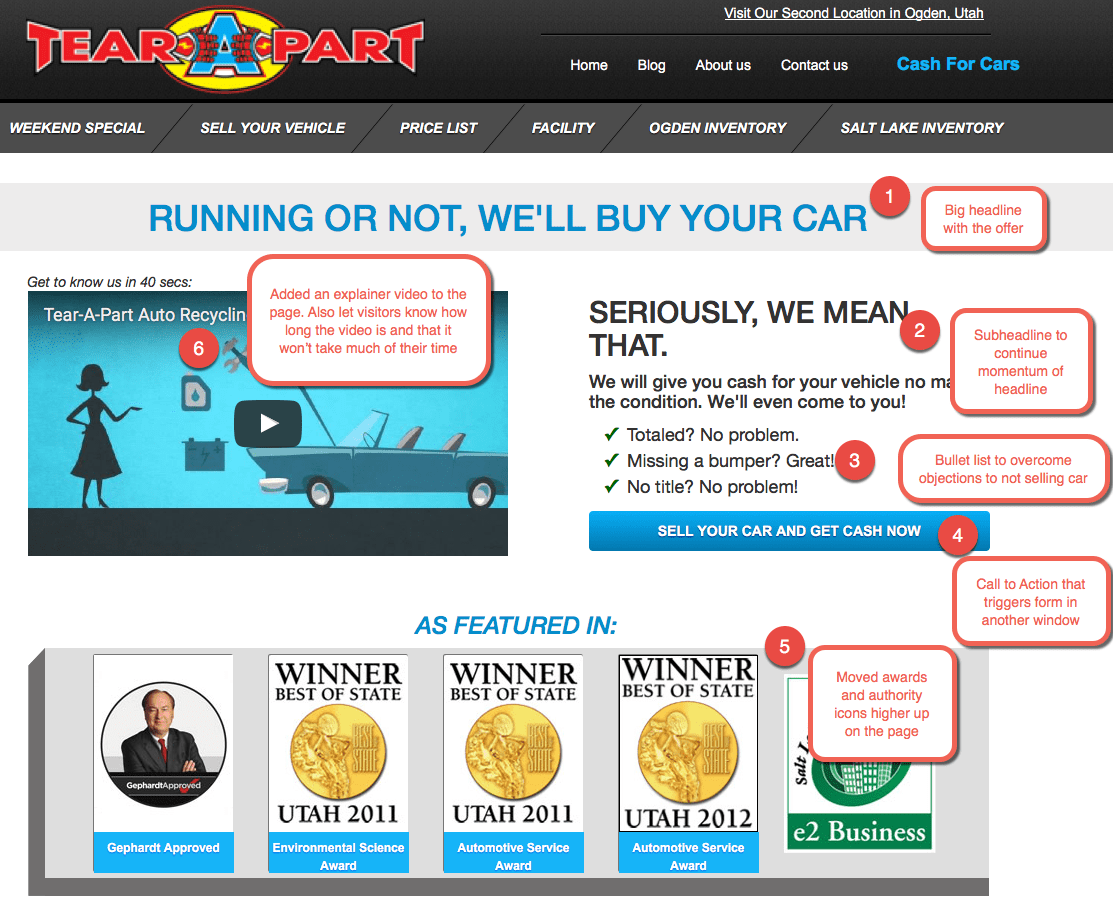 Changes to the Tear A Part homepage

The leads soon started rolling in.

“With other media companies we were spending double or triple the money and didn’t see results for at least three months. With Carlos we were getting new leads within 30 days.”

“We started buying cars like they were coming out of our ears,” Chris said.

Here’s a screenshot of the test data of the homepage in Optimizely: 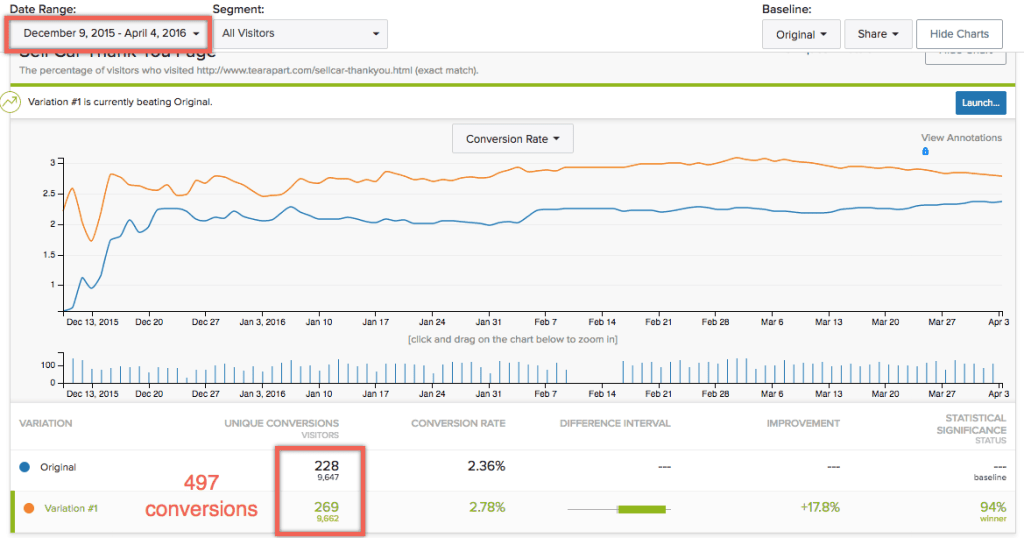 Before meeting Carlos, Chris had lost faith in the media industry. He had worked with four high profile media companies. They had all let him down.

In contrast, Carlos kept Chris informed and was always available to answer questions. On one occasion Chris saw a drop in new leads.

Chris contacted Carlos to ask what was happening. Carlos immediately responded with an explanation. Google had changed its search algorithm. A change that had impacted all websites.

Conversion Surge worked to correct the situation. Within days, Tear A Part was once again buying cars.

Chris was impressed by how quickly Carlos resolved the problem.

“Carlos offers a boutique service. I know his attention is focused on us. I never had that with the bigger media companies,” Chris said.

Chris had found a reliable business partner. Someone who never pushed him to needlessly increase his budget.

“We’ve always had good, open communication. Carlos has always been really fair. Anyone else would constantly ask me to spend more money. With Carlos, we consistently came in under budget,” Chris said.

Business at Tear A Part is thriving. With the help of Conversion Surge, Chris is receiving more leads and more cars than ever before. He is building two new locations and creating a dedicated call center to handle the jump in call volume.

“With Carlos’ help, we can crush the competition. I’m ready to conquer the world,” Chris said.